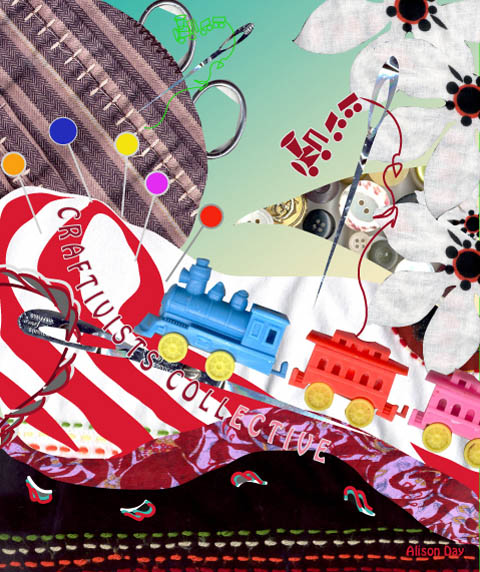 'UK train fares are some of the most expensive in Europe, and they are about to rise further, at great cost to both people and planet. The Craftivist Collective and Climate Rush are taking a stand.' - Hannah Bullivant 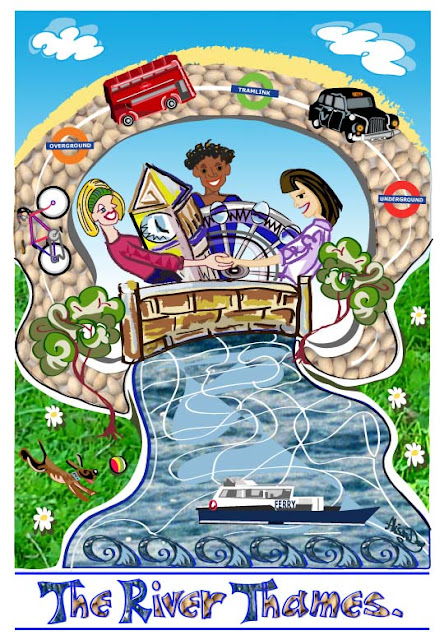 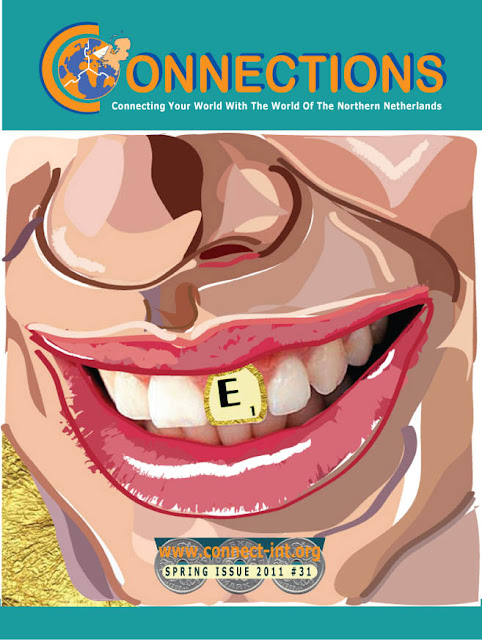 My illustration for the cover of the current issue, the Spring Connections with the theme of Entrepreneurs.
© Alison Day
First published in the Connections magazine
#31 Spring 2011, a publication of Connect International
Posted by Alison Day Designs at 08:06 No comments: Links to this post 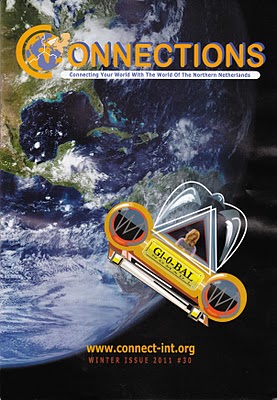 My illustrative cover for the Winter Connections with a theme of Global Nomads
© Alison Day
First published in the Connections magazine
#30 Winter 2011, a publication of Connect International
Posted by Alison Day Designs at 08:05 No comments: Links to this post

The Shoe is Art - Wopke Grobben 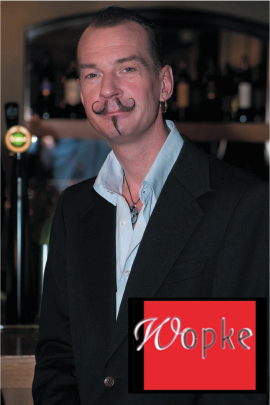 ‘A shoe has something sensual – you’re selling a piece of temptation’
– Wopke Grobben.

As old, if not older than the ark, shoes have been around in many forms throughout the ages, the oldest known pair of shoes being sandals and dating from 8000 to 7000 BC. With the rise of wealth in Europe in the Middle Ages, shoes left the realms of being made solely as a protection for the foot and became status symbols, often with over-exaggerated features. By 1800, a sew-on-sole had appeared and shoes consisted of a left and right foot, as opposed to “straights” where both shoes were identical.

Since the mid-20th Century, with modern day techniques, machinery and the added use of synthetic materials, most people nowadays possess at least one pair of shoes. Mass production, has led to the time honoured craft of the shoemaker, like so many things, becoming a dying art.

It is with this in mind, and a curiosity as to how a good quality pair of shoes are made that I decided to pay Wopke Grobben’s studio a visit. The shop, is one that I have passed many times, so it was a treat to finally set foot inside. Tools lined the walls, machines both antiquated (his favourite a German Pfaff) and modern, were waiting for action, whilst a portfolio of finished shoes lined the walls, each waiting for the appropriate wearer to come and claim them. As I entered, Wopke, sporting a Dali-esque mustache, greeted me and we sat down at the enormous central wooden worktable with steaming cups of tea.

I asked him what made him become a shoe designer. It seems that ten years ago, unable to find a particular style of pointed boots he decided to take matters into his own hands and learn how to make his own. There followed a period of study where he learnt not only the trade, but the business side too. A stint as a trainee with a court supplier meant that he learnt his trade literally from the basics up. This included the mundane sharpening of tools and sewing of paper patterns. This he says was an invaluable lesson, and has enabled him to produce a perfect end product. 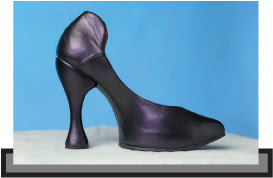 To make a shoe, a ‘last’ (wooden shoe form) has to be made from a casting of the wearer’s feet. This is carved and shaped until it is a perfect blueprint and can be used time and time again. Combine this with details about the wearer and the success of the shoes is assured. ‘Shoes compliment the person’ says Wopke. He explains that everyone has their own tone colour and personal palette, which when combined with lifestyle details, and not forgetting the time honoured principle of the golden ratio, results in the creation of the perfect pair of shoes. This sounds like a magical formula reminiscent of a fairytale, ‘The Elves and the Shoemaker’ by The Grimm Brothers.

Wopke says he has no shortage of ideas of what to make, it’s a question of which he would like to make next! For inspiration, he looks to the era of Louis XV, the 1940’s, books and films. Colour he said, he has had to learn. Materials and leathers, he acquires from a supplier who brings him sample pieces from Italy. One by one the shoes and boots are brought to the table and shown to me to illustrate points of style and how the same shoe can look in different materials. Shoes where he has used the horns of a cow for the heels, a radical pair of red and black boots (perfect for a party), a shoe whose design consists of one continuous line and (my personal favourite), a beautiful pair of purple high-heeled court shoes with Marie Antoinette heels, where every gold-coloured tack is visible on the soles. The latter I held, and can only say that not only is the workmanship perfect, but these shoes have a real weight to them, unlike their commercially produced counterparts.

With at least a hundred man hours in the making, it’s no wonder that you may pay a little more for these, but the advantage of handmade shoes is that they fit the foot perfectly, improve with age, last considerably longer and have been made for no one else but you!

Posted by Alison Day Designs at 16:15 No comments: Links to this post 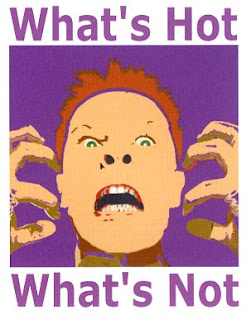 A business has to be involving, it has to be fun, and it has to exercise your creative instincts. - Richard Branson, founder of Virgin

The word “entrepreneur” is believed to have come from the French economist Jean-Baptiste Say, in the 19th century. His definition was: "one who undertakes an enterprise, especially a contractor, acting as intermediatory between capital and labour."

Entrepreneurs are often gifted individuals who, seeing a new idea or recognizing a gap in the market have the talent to turn it, more often than not, into a viable business. From the onset they are willingly accountable for all the risks, as well as the final outcome, when it comes to making their idea or dream a reality.

Those who possess real entrepreneurial spirit will enjoy the successes and be undeterred by the failures; oftentimes, the latter only serves to fuel the drive to succeed and be independent, in what is an increasingly competitive world. In the immortal words of Grandmaster Flash and the Furious Five (1980’s): ‘It's like a jungle sometimes, it makes me wonder how I keep from goin' under…’ In their heyday they were entrepreneurs too; they pioneered the start of a musical revolution known as ‘hip-hop’, and were the first popular music band to use a line up of one DJ and five rapping MCs (Master of Ceremonies). The latter idea, they took from the Jamaican dance halls, where the different musical acts were introduced by toasting in rhyme, which was directed at both the audience and the performers.

So, are entrepreneurs born or can you learn to become one? Opinions differ; some say that people are born entrepreneurs, whilst others believe that the qualities can be learnt and all you need is the sheer determination to succeed. Interestingly enough, psychological tests show, when it comes to gender, that both sexes are equally matched and equipped when it comes to entrepreneurial qualities. Any thoughts to the contrary are generally a result of stereotyping. That said, more economically secure countries have a higher proportion of opportunity-driven, as opposed to necessity-driven, women entrepreneurs.

Should you want to test the waters and see if you’ve got what it takes character-wise, before launching head long into the world of the entrepreneur, why not take the assessment test on this website:
The Entrepreneur Next Door.

Then there is the question as to why people become entrepreneurs? Certainly it’s a less secure lifestyle and a lot more work, but what could be more satisfying than seeing an idea grow, being one’s own boss and reaping the rewards? Plus the fact that after recent world affairs, a job for life is no longer assured.

An entrepreneur of note and my personal favourite has to be Sir Richard Branson. From the humble beginnings of a music mail order to the multi-national Virgin company. I admire his ceaseless energy, the get-up-and-go spirit, yet all the while remaining himself. Also, the amusing story he told in an interview of how at the end of the month he and his then partners invariably had to hide (on their premises) from those they owed money to, in order to buy for time. These days he has the financial freedom to be able to pick and choose his entrepreneurial enterprises.

A little closer to home and we come across the ever-increasing availability of groups of like-minded entrepreneurs to join. Seeing as these days most self-employed work from home, which although great can prove to be isolating, it is useful to be part of a network. With a network you have the possibility to meet people, make contacts, exchange ideas, and use others as sounding boards for support and any problems encountered.

One such group, which I am connected to, is CRAVE; entrepreneur Melody Biringer started it in the United States and it is now taking The Netherlands by storm; this is a network of entrepreneurial women. The Urban Girl’s Manifesto for Amsterdam came out in 2010, and features over 150 women in the Amsterdam area alone that you really should know. They offer a diversity of products and services via their businesses. There will soon be one for the Den Haag ladies, as this is still in the making. Crave is proving to be a very interesting but also invaluable network.

For more information:
CRAVE Amsterdam. Should you wish to purchase a copy of the book, please contact me. Other interesting and informal ZZP groups of note in Groningen, in Dutch: Zelfstandig Zonder Personnel (Self-employed Without Personel) include, The Groningen Open Coffee Club, and The Societe de Pudding Fabrique. Both websites are in Dutch.

And finally, should the entrepreneurial assessment test turn out positive and you decide to dive into business, don’t forget to heed the laws of Karma whilst doing business: ‘What goes around comes around.’ Unlike the famous American entrepreneur, P. T. Barnum who posted signs in his museum, which said “This Way to the Egress!” Excited visitors followed the signs and ended up outside the museum. In order to re-enter and continue their tour they had to pay another entrance fee. He may well have had a sense of humour, but someone else had the last laugh, as the museum burned to the ground in 1865!

If you would like to learn more about the rules and regulations with regard to starting a business, why not read the article on page 13 of this issue?

Posted by Alison Day Designs at 14:10 No comments: Links to this post