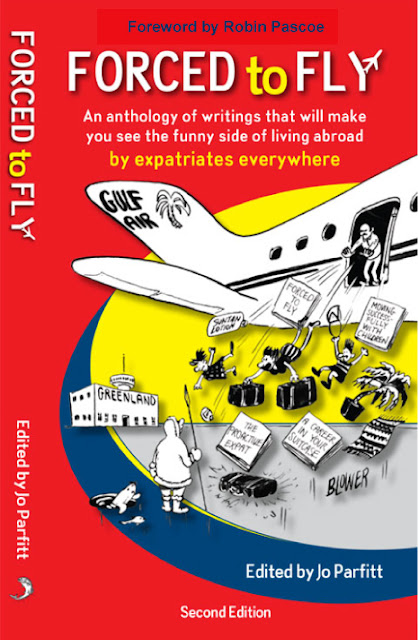 Forced to Fly is a useful anthology, offering practical information on living abroad, including invaluable tips, groups to join, and a variety of websites to consult, between its covers. Aiming to give moral support and advice for those considering a move abroad - how to survive, and ultimately enjoy it.

This, the second issue, also includes an extensive collection of short stories, contributed by a total of 40 expatriates, as a result of a call-up and final selection by Jo Parfitt. All of the authors, have lived or continue to live abroad. Their stories highlight experiences, both good and bad: stories which are insightful, often highly amusing and cover a wide gamut of emotions that we can all relate to. Stories which are oftentimes hilarious, sometimes thought provoking and now and again downright frustrating.

Forced to Fly (Summertime Publishing), is the second book where I have participated in its re-issue. This time, however, I not have only been instrumental in the re-vamp of the internal text, but also a series of 50 black and white illustrations, to accompany and enhance the various sections, and collection of short stories throughout the book.

So...  for your OWN copy of Forced to Fly, why not pay a visit to Amazon, where you can purchase it: for Kindle  or as a paperback .

And... once you are in possession of your own copy, you will discover that one of the short stories is mine!

It is a series of brightly coloured cards depicting a variety of animals, which have been attracting my attention for a while. Each has its own story, and is illustrated to incorporate realism, in the accuracy of their detailed rendering, plus a hint of the world of cartoon in their personification. Although frogs seem to be in the majority, it is the card with a bird wearing a top hat tilted at a rakish angle, that becomes the deciding factor in my contacting the artist; beady eyes, long pointy beak and an intense stare invite the viewer to choose one of the three upturned cups on the table in front of the bird, in a gamble, to reveal what’s hiding underneath.

These are the creations of artist Jasper Oostland who lives and works in Groningen. I arrive at his house on a rare sunny day in June; a house filled with large windows, which results in an overall bright, airy feel, and is the perfect residence for an artist. With his studio situated in the attic, we head upstairs. White walls, windows on two sides, jars filled with brushes awaiting action, and enormous pots of acrylic paint stand resolutely on a table. Nearby, is an easel with his latest work in progress; there’s a lot of bright pink happening in this work, and from the outlines I can just make out a car and a flamingo. The easel has an ingenious feature - the addition of a rotary centre. This allows the current work to be turned a full 360 degrees, allowing complete ease of access to the entire picture whilst it is worked upon.

A former student of the art school, Minerva, in Groningen, Jasper studied illustration with an emphasis on technique. Studying the use of light, its source and application, is an important part in creating the 3-D realism of the animals. To my question about his colour usage, he says it is something that he uses intuitively. Each work starts with a wash of background colour upon which the animals are brought to life through a series of painted layers progressing from dark to light. As he talks he passes me an amazingly detailed picture of a large grey rhino, standing wistfully next to a delicate pink rose in a glass vase. The equally bright pink background is one of his experiments; in this case how to make pink work on pink. Other little tricks and details he puts in his work are expressly done to leave something for the viewer to discover. 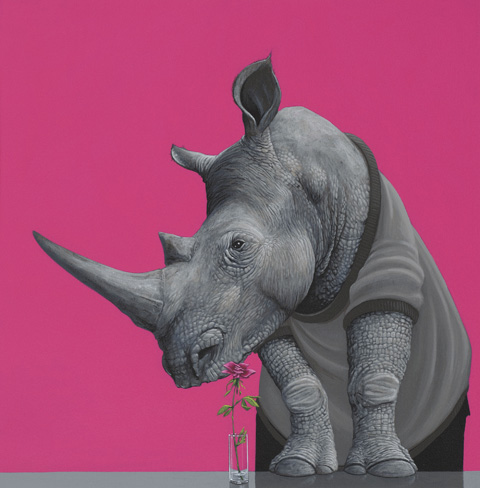 The abundance of frogs in his work, often in everyday situations, leads me to ask firstly, if he is the frog, and secondly, if the variety of situations the frog finds himself in, is maybe a tongue in cheek social comment. To the former he says he is not as far as he is aware the frog, although sometimes according to his girlfriend, he can have a particular stance or expression that reminds her of a frog. As for a deep and meaningful message or social comment, he says there isn’t one, he likes frogs, and in particular tree frogs because they have a lot of character; they have great hands with padded fingers that can hold things and expressive eyes.

When it comes to inspiration he researches photos in books or images from the Internet, for the accurate depiction he needs. As for what comes first, it is more or less spontaneous - sometimes it’s the animal and sometimes the object. Ideas also come from association or a particular pose, and these are worked out further in a sketchbook.

These days it is very important for artists to be active with self-promotion if they want public attention. Jasper seems to have this under control: he has an up to date website; makes use of social media (find him on Facebook); exhibits regularly; sells work online – both originals and giclées; uses Chat Roulette, a website where you can watch him paint live. Also, by every exhibition he places a large pile of cards depicting one of his works and including his contact details. As he says: “People keep them and pin them up.” This continual visibility has led to 20% of his work being commission based, and, as a result he finds himself in the enviable position of having enough work for a year.

When asked if he has any dreams for the future, he says that at the moment he is quite happy with the status quo, but maybe a book, a little more structured organization of his business as a whole, and, as the father of two young daughters under five, a little more sleep wouldn’t go amiss.

If you would like to see Jasper’s work, why not visit the library in Groningen, where he is currently exhibiting a selection of works. It runs from 5th September 2012 to 4th January 2013. 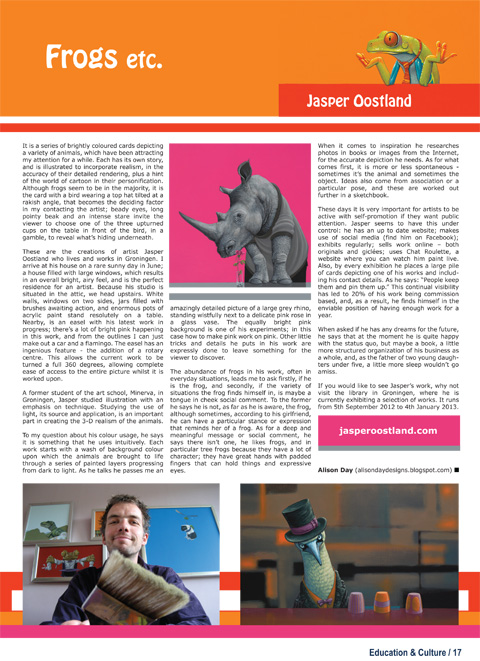 Posted by Alison Day Designs at 09:13 No comments: Links to this post