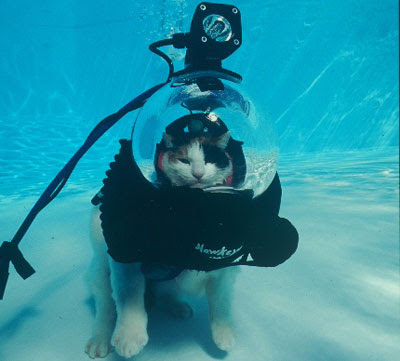 Phew! As publications editor and designer of Connections magazine, those are all the articles I have written and just a few of the pages and covers I have designed to date over the last 5 years.The magazine is a publication distributed by Connect International.

A fair amount of material and the joy continues, in the Autumn issue... so watch this space for more.

Feel free to share my articles on social media, but please keep the credits intact.

So, until the next post - meet ~ Scuba Cat - (Sabotage Times)

Posted by Alison Day Designs at 15:06 No comments: Links to this post 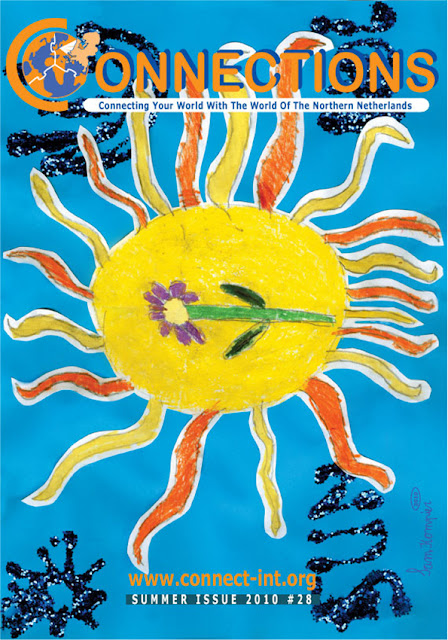 For the summer issue of Connections, we set a competition for children asking them to 'Design  a Summer cover' for the magazine. Here is the the winning entry created and sent in by Sam Kompier. 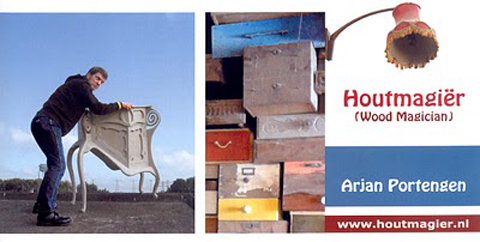 Finding some studios and their artists isn’t always a breeze, but once I had found a large and obviously empty building that looked like a perfect space to house a furniture designer, I knew I was on the right track. Previously a warehouse for kitchen supplies, the building is now totally empty, except for the presence of four artists who have made personal studios out of the space within it. One of these is Arjan Portengen; also known as ‘De Houtmagiër’ (Wood Magician).

The revolving entrance door to the building had to be unlocked in order to let me in and opened out onto an enormous interior space of concrete floors, large high windows and a motionless escalator to the upper level. As we walked through it towards Arjan’s studio of six years, the abandoned feel of the building, reminded me of the atmosphere in the film ‘Escape from NY’ starring Kurt Russell.

The building is one of a multitude of properties managed by Ad Hoc (www.adhocbeheer.nl) a nationwide company responsible for vacant buildings. These are rented out, for a token monthly payment, until such a time as the property is reused or demolished. The tactic is to prevent vandalism and break-ins, so often prevalent in empty buildings. 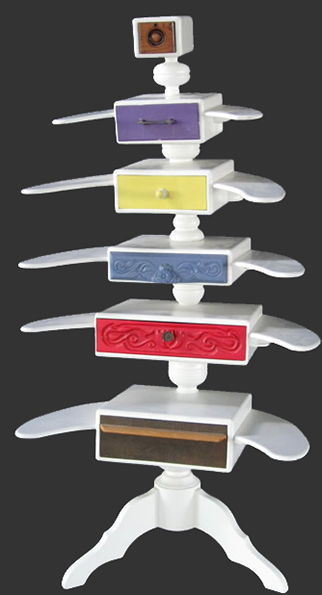 Once ensconced on a large sofa with a cup of coffee I asked Arjan what led him to becoming the wood magician and furniture designer. In reply, he said that for him, old furniture has always had more soul than new and many of his pieces have started out life as an object thrown away on the street, by a previous owner. This interest in furniture and bric-a-brac in turn has led him develop his signature style by creating a new object, by way of a collage of both new and old elements, which at the finish becomes a completely new piece of furniture in it’s own right. Most of the time he already has an idea in his head to start with and this is translated into a sketch, but as with most sketches, the idea evolves as he works. He coupled his interest in furniture with a study, where he trained as a furniture maker for a year and a half, thereby learning the basics of furniture construction, the rest (in his words) came from him and has resulted in what he makes today.

In a lot of his work there lies a conceptual joke, cupboards dance or take on a new form or life of their own. For example, there is the ‘Ribbenkast’ (Ribs cupboard), a white skeletal spine-like construction supporting a series of draws, of varying sizes, at intervals along its length. The skeletal spine symbolizes death and the draws represent memories. Each draw is individual and brightly coloured. In this case (which is an exception to his general colour use), it is a reference to the Mexican traditional use of vibrant colours and their intense relation with the dead, particularly during the annual ‘Day of the dead’ celebration. 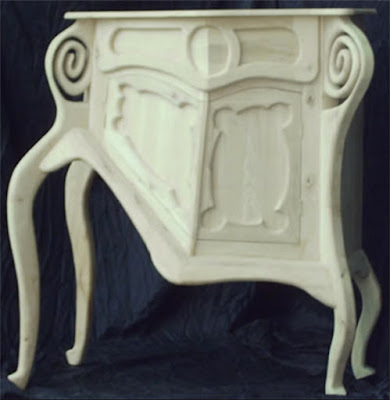 
When asked about influences in his work, he says he tries (hard though it is) not to be influenced by external influences and if he is, it is not done expressly.

Other than his creative side and the ‘kronkels realiseren’ (realising the twists of ideas that present themselves), he is a restorer and carpenter able to make and mend traditional doors, cupboards and interiors, which he enjoys. At the moment he is restoring a farm interior and its built-in cupboards, so the creative projects are temporarily on hold.

I ask him if money and support were no object, what would he like to make here in , to leave his mark? After a bit of thought Arjan came up with two. The first would be to work his wood magic on the east wall of the City Hall or a whole room as artwork, with total free licence to do whatever he wanted. The second came just as I was leaving. To build a tram carriage totally out of wood and in his inimitable style and attach it to one of the future trams that  will be getting. I pitch in, that he should work his website address into the side of the tram too for a bit of publicity! With that the revolving door is unlocked again, I step out into bright sunlight, take my leave of Arjan and hop onto my bike in search of some retail therapy at the nearby IKEA.

Posted by Alison Day Designs at 12:13 No comments: Links to this post